The "Austrian National Report 2004 on the implementation of the Memorandum of Understanding on the Conservation and Management of the Middle-European Population of the Great Bustard" (Raab 2004), section 10, lists 8 major current threats to Great Bustards, all of which are considered here:

Collision with overhead power lines was the most significant mortality factor for fully grown (i.e. immature and adult) Great Bustards in Austria before implementing the actions of the “Great Bustard” LIFE Project. The proportion of collisions clearly decreased since the finalisation of undergrounding of medium voltage power lines and marking of high voltage power lines in the project areas.

The Great Bustard is one of the heaviest birds in the world that is able to fly, with males weighing between 8 and 16 kg. They are powerful and tireless fliers and despite their impressive weight they can take to the air from the spot with vigorous wing beats. Even though Great Bustards like to roam around on foot in open, unfragmented areas, they fly for several kilometers between sites in their home ranges almost daily. They are excellent fliers and can cover distances of more than 200 km per day. (See section "Biology" on flight movements and underlying reasons).

Since Great Bustards frequently fly and since their maneuverability is limited by their great weight and large wingspan, collisions with power lines occur where there are numerous overhead powerlines inside bustard ranges, in surrounding areas, or on flight paths between different ranges.

Collisions with power lines have been known as a threat to Great Bustards nationally and internationally since overhead power lines were first being built. The international "Action plan for the great bustard (Otis tarda) in Europe" discusses the topic in the section on improving habitats (2.2.3) and rates it as high priority. In the "Action Plan" of the Memorandum of Understanding on the Conservation and Management of the Middle-European Population of the Great Bustard prevention of collisions with power lines is referred to as follows: "Existing lines which cross Great Bustard areas should be buried or marked prominently. New lines should not be built across Great Bustard areas." Austria's national Action Plan "Protection of the Great Bustard in Austria", section 2.1.3 (Habitat Conservation) also states that undergrounding or marking power lines in agreement with operating companies should be "implemented without delay".

Predation is a threat primarily applying to eggs, juveniles and immature Great Bustards. The main predators are red foxes, other carnivorous mammals such as badgers, martens and wild boars, but also crows and birds of prey.

Clutches are at considerable risk from carnivorous mammals, especially red foxes (Vulpes vulpes), and to a lesser degree from carrion crows (Corvus corone) and birds of prey. Rabies immunization has led to a marked increase in fox populations in Austrian bustard areas over the last years. Since most Great Bustard nesting sites are on dedicated bustard conservation sites and threats from agriculture are therefore generally neutralized, predation is left over as one of the most significant threats to eggs and juvenile bustards. In 2001, for example, the majority of eggs, chicks and juveniles in Lower Austria's bustard ranges were lost to predation.

For many years, high intensity of agricultural use was the single most important threat to Great Bustards in the breeding season, particularly to nests and young bustards, but also to incubating females, because they frequently left the nest too late to escape from approaching machinery. Thanks to the large-scale implementation of dedicated bustard conservation measures with funding from the Austrian EU agri-environment scheme (ÖPUL), most breeding sites in all bustard areas are now protected from losses through intensive agriculture. However, from time to time individual females unexpectedly breed outside the specially managed conservation areas, exposing themselves and their clutches to great risk from agricultural management measures.
In recent years, a number of Great Bustard nests have been found outside the areas that are under dedicated bustard conservation measures. Unless such nests are located in time and agreements are made with the farmers concerned, they have very slight chances of succeeding and indeed the incubating females may be killed.

Lack of public information and a limited appreciation of Great Bustards and their habitats can lead to unnecessary disturbances. Bustards, particularly in the breeding season, can be disturbed through leisure activities such as horse riding, cycling, photography, nature observation, private aircraft or nordic walking. Hens often use grassy roads between fields for foraging and sometimes breed only a few metres away from these. A single disturbance may suffice to cause a hen to abandon her nest. Similarly, hunting activities may be a source of disturbance, for example hunting of roe buck in bustard areas in the breeding season, feeding game in the vicinity of bustard nesting sites and winter ranges, driving through set-aside fields, and communal hunting of hares and pheasants in autumn.
Throughout the year, disturbance usually causes Great Bustards to fly off suddenly, increasing the risk of collision with power lines, and it may weaken them in times of hardship by expending energy unnecessarily. Disturbance can also seriously affect reproductive success. If eggs or juvenile bustards are left alone by the female due to anthropogenic disturbance, they are prone to a higher risk of predation.

Severe winters with a lot of snow may force some populations of Great Bustards to migrate.

Associated with such long-distance migration is a greatly increased risk of collision with power lines, as well as other hazards. For this reason, winter migration regularly leads to severe losses. 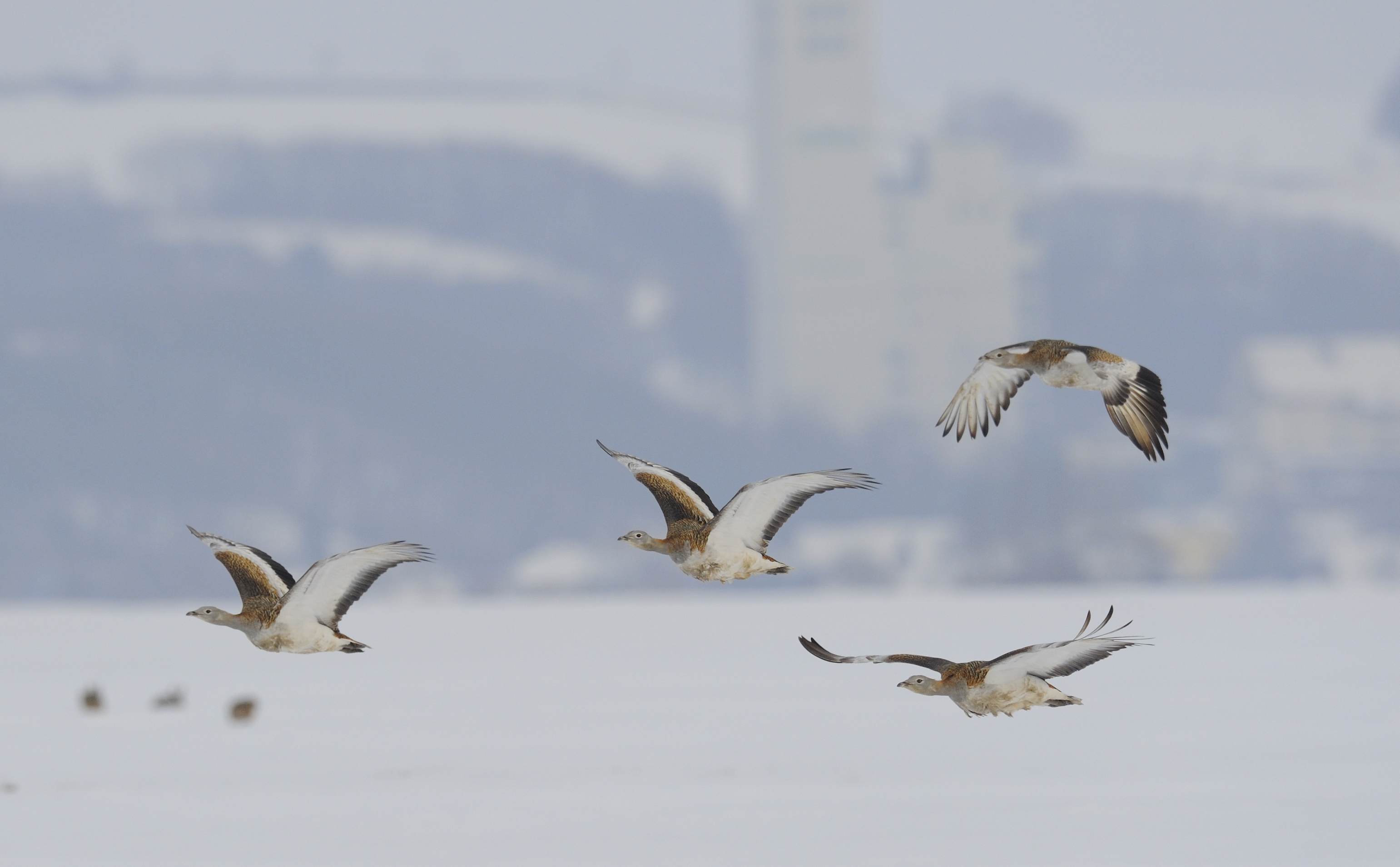 Extreme or adverse weather in the breeding season

In Austria, the breeding season of Great Bustards starts in the last third of April and reaches its climax in May and June. At this time of year, weather conditions may still be very variable with wet or cold spells, strong downpours of rain and hail.

Cloudbursts and hail can threaten clutches and force hens to abandon their nests. Long spells of cold or wet weather may expose chicks to hypothermia and illness.

Large regions of eastern Austria are subject to high development pressures. Time and again infrastructure development leads to habitat fragmentation or deterioration. Infrastructure linking Austria to the neighbouring new EU countries, e.g. power lines, roads and airports, but also wind farms, industrial estates and shopping centres are the main culprits.
Overhead power lines, wind farms and other structures potentially endanger flying bustards, fragment habitats and hamper exchange between subpopulations. Despite the fact that the most important bustard ranges in Austria are secured through large-scale Natura 2000 reserves, the species may be affected by infrastructure development outside these areas when it puts obstacles in the way of flight paths.

The area under rape seed cultivation has declined in recent years due to decreasing incentives.
Winter rape is the most important source of food for Austrian Great Bustards in winter. Reduced cultivation of rape seed may compel bustards to fly longer distances, increasing their risk of colliding with power lines and their expenditure of energy.In Austria, great efforts have been made for many years to diminish the threats affecting Great Bustards through suitable measures. The LIFE Projects in particular (see section LIFE Project 2004-2010, LIFE+ Project 2010-2015 and LIFE Project 2016-2023) have been reinforcing these efforts since 2005.